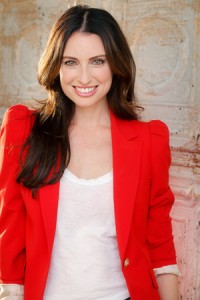 Samantha is an Actress, On Camera Host and Model. Oh and she claims she can beat almost anyone at Tennis. (she was a top ranked Canadian junior back in the day).

As an actress Sam has appeared in numerous feature films and TV shows both in Canada and the US including, Degrassi The Next Generation, Kevin Hill, The Tortured, Huff and Shark City.

Samantha was just recently nominated as Best Actress in Comedy at LA Web Fest, for her appearance in Season 2 of Dogs & Me. Samantha has also recently appeared in a few shows for Awesomeness TV’s Awestruck Network.

As an on camera host, Sam has toured the globe covering Cannes, Sundance, The Toronto International Film Festival, AFI Film Festival and more. She was the co-host of This Week In Fashion, is the face of Canadians Abroad LA, and was a spokesmodel for Greygoose Vodka, covering Southern California Tennis leading up the US Open. Samantha is also currently working with Nylon Magazine, creating digital content and appearing in their videos.

Samantha is making a name for herself in the “mom” space, creating comedy content and style content geared at to the millennial mom.

You might have recently seen Sam in commercials for Toyota Prius, DSW and Comcast or in print ads for Sony, Belly Bandit and on your lottery scratch cards. As for her tennis career, you can check out her alter ego who is gearing up for the pro tennis tour – Brooklyn Silvergold on funnyordie.